You are at:Home»Recipes»Marzipan ring cakes – a Danish New Year tradition

Marzipan ring cakes are a Danish New Year Tradition. At midnight when the clock strikes 12 and the fireworks burst we take a glass of champagne and a marzipan ring cake to celebrate the coming of the new year. The last 12 years it´s been my contribution to our New Year party with friends. Traditional it´s a large tower cake, but it´s a lot easier to make small cakes. And a lot easier to transport as well. Here you get my recipe which also is included in my e-cookbook “Around Scandinavia in a cup”. Marzipan ring cakes were invented at the end of the 18th century by a baker from Copenhagen. 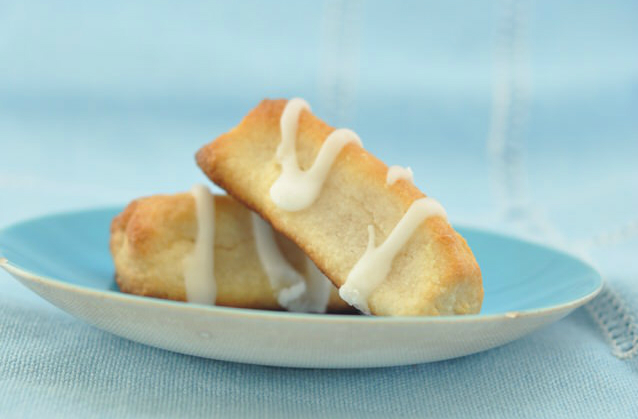 Mix the icing sugar with the egg white and allow it to stand until the icing sugar is dissolved. Knead the mixture into the marzipan until it is evenly mixed all through.

Form the mixture into short sausages, about 5 cm long. Squeeze them a bit at the sides, so that they are triangular in section. Dip your fingers in water, then the marzipan will stick less. Lay them on greased baking trays or baking paper.

Bake them in the middle of the oven at 175 °C (Gas Mark 4) for approx. 10 minutes, until they are just golden, but still soft inside. Allow the cakes to cool.

Stir the icing ingredients together. Put them in a plastic bag and cut a tiny hole in the corner. Pipe the icing in a zig-zag across the cakes. Of course, you can use a piping bag instead.